Catalans are not Spanish

An adaptation of a fragment of the book “Despullant Espanya” (Undressing Spain) by Víctor Alexandre (pages 41.-45) published permanently at www.racocatala.com/cat1714

Catalan people are not Spanish, for the same reason that Spanish are not Catalans. It seems unbelievable that such a simple thing is so difficult to understand! It is truly exhausting to have to repeat always the same truths on an on. But hopefully this is not the result of a bad education, but just the social and political strategy of forked tongues, specifically designed to clean people’s brain.

Despite some are fully conscious of this perfidious strategy, most we have suffered brain-wash without our own awareness, by avoiding our own responsibilities to our nation, whether in the sphere of language, identity or institutional rights of the Catalan country. However, for those few who are aware, they consciously spread their hatred against Catalonia all around. Luckily, these twisted individuals are very easy to identify since they consider the idea of the unification of Catalan Countries as a stupid and outdated idea while they cannot stand any demonstration to support our independency, our language or our institutions.

We should understand them, though, since they are not Catalans they must be superior to us and are in power of the universal truth? These Spanish offenders look at Catalans as if we would be an “enfant terrible” in front of the fatigued tutors. Yet it is surprising that they are promoting modernity and universality now, but keep most people submissive to their “established order”, so devoted to the system divinities, so much suspiciously defending the values of a Spanish monarchy that was re-implemented by the fascists at the end of last century. It is honestly surprising so much genuflection and fervour to obtain the monarchic benediction.

No, Catalonia is not Spain. And if Catalonia is not Spain, Catalans are not Spanish. Catalans, as the noun indicates, are simply Catalans, nothing more. And if this obvious fact must be a reason for conflict, then let it be. But what we cannot do is to renounce to everything we are just to avoid confrontation, but they are the ones generating the conflict as they are compelling us to stop being what we are to become what they are, so that we forget our name, our language and our history. No thanks, we do not want to be Spanish then. 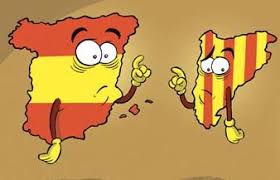 And it is not correct the interpretation of saying that one can be Spanish without stopping being Catalan. So to say, some people believe one can be both things at the same time, as an Extremaduran is also Spanish and a Berliner is also a German. No! It’s not correct because the root of such reasoning is based on the supposition of belonging to a nation: if Catalonia and Extremadura are both in the Spanish estate, why Extremadurians are Spanish and Catalans are not? It is very simple why, because Extremadura is not a nation inside the Spanish state. Extremadura IS Spain. However, Catalonia, it’s a different nation, though still under Spanish administration, but it’s a totally different country. Therefore it is childish to defend the concentric Spanish identity with the statement of “patria chica”: a Spanish-Extremadurian from Badajoz-de la Puebla del Prior. This retroactive reductionism can also be applied to Catalans: a Catalan from Empordà-Figueres at Sant Llatzer street; or to Germans: German of North-Westfalia at Bonn at Goethestrasse. None of the two latter examples contain any incongruence, as they involve one unique nationality and identity. Having been born at street Sant Llàtzer at Figueres, the capital of Alt Empordà, a Catalan region, are not identities on their own but elements configuring one concrete identity, that in this case, is a Catalan one. We cannot confuse one extremity with one identity, as we should not confuse reality with fiction.

And what about Europe? If one can be Catalan and European at the same time, why cannot you be Spanish and Catalan and European, or Catalan, Spanish and European? Here the equivalence is also wrong. What is Europe but a union of identities? Like the United States, for example they are a unique identity, But they are not the only identity in Northern America or the whole continent. In Europe it happens the same. Europe is a continent and we are inside it. Geographically, both Finnish and a Portuguese are Europeans, but they have different identities and nationalities, right? As it is different a person from Quebec from a person born at Uruguay, though they are both Americans. To this point most people would say: then being American is an identity. No, this means confusing the continent with its contents. To start with, what does it really mean to be American? What type of information is given when someone says “ I’m American”? If we do not dare asking anything else, we should look then at the persons physical features, the language and accent they speak. But getting into to the clichés could only lead us to further misunderstandings: nor all blondies with clear eyes are northern-Americans neither all south American look like Pancho Villa or Salma Hayek.

And the same happens with an Asian or a European, what brings us to the same point: we must not confuse the configurative element of an identity with the identity itself. In other words, Catalans do not have a triple identity (Catalan-Spanish-European), neither have Spanish a double identity: Spanish-Europeans. All of them and all of us, we have one unique identity: we are Catalans and they are Spanish. And since both Catalonia and Spain are IN Europe, therefore both nations ARE Europe.

Those who impose the Spanish identity, aside of unconsciously exhibiting reactionary ideas, are only projecting a totally outdated image of Spain. An image somebody introduced into their brains and now they cannot imagine it any other way. Like an act of injustice lasts among time only if it is hidden behind normality.

Mr. Salvador Cardús has described it with a lot of accuracy: “this is the drama of Spanish, that they cannot imagine a Spain without us. They can’t imagine there would be a “missing piece” because their identity image adds us, if not as Catalans, as mere individuals. If they could just imagine an identity on their own and have a name for their particular reality, like the British do. British perfectly imagine themselves without the Scottish or the Northern-Irish. Because being Scottish is not being British, but nothing happens, right? However, when a Spanish says, “we are Spanish”,  his mental representation of this political reality contains everything that person believe is a whole”.

16 thoughts on “Catalans are not Spanish”